pieces of "Arm Your Innocence" 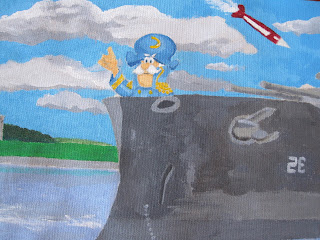 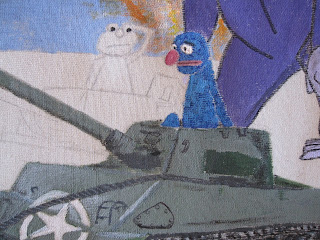 Some pieces from my long in the works next painting. Little by little, getting it done.
Posted by Bo at 6:01 PM No comments:

Every word was a dirty bomb, used carefully and specifically for a subtle destruction. He was just weakening her foundation, getting her to the tipping point when one final blow would implode her into a fragile kneeling waterfall.

Aston remembered a time when he wasn’t brimming with such nuclear animosity. When “whore”, “bitch” and “cunt” were words and not weapons. His war with Julie was numbing him to these atrocities he should have been horrified by.

“Keep going,” she sobbed. “Rage at me! You cowardly disaster.”

He couldn’t decipher the meaning in these shots. She was firing blanks, just trying to make noise to scare him off. Whether the danger was there or not, he didn’t care if she killed him. He was an emotional terrorist. A psychological suicide bomber.

With his chin at her eye level, Aston prepared his final infiltration, reaching invisible arms deep into his esophagus to pull out the most threatening venom he could spit into her ear. “You are the greatest mistake I ever made, and I regret every minute of my life wasted near you. You don’t deserve to be loved. You deserve to live and die alone, completely miserable. As fucking miserable as you’ve made me.”

He choked on his composure and stuttered out some indecipherable gasps.

Aston’s chambers were empty. All that was left was an empty egg shell of skin, hair and smoke. If she breathed one word back to him he would have crumbled before her eyes.

But she was smart. She held her reinforcements back behind her leaking green trenches. There was no need to waste them on an enemy slinking back into the ether. The Julie War was over, and Aston let his brow shadow his face as he retreated out of the living room they had spent four years battling through. Marched through the kitchen where they had shared innumerous détentes. Out the door that had slammed too many times.

He was a nation of aggression and loss. Bluster, bombs and begrudgement. Aston knew his society of one was on the brink of collapse, and it would be a long time before his ruins would resurface. He also knew this was for the best.
Posted by Bo at 11:02 PM No comments: 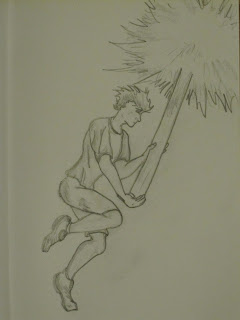